I'm so excited about my new endeavor and want to share it with everyone.  I wish someone had just told me years ago how great this would be COUPONING.  Who would of thought that I would be so excited about something like that.  As I'm getting into this and talking to some of my friends and family  I have found is they have no idea how much they are spending on groceries or really anything else.  I was really shocked to say the least.

First off let me tell you about the best program we have ever done.  It's called Mint.com and ITS FREE!!!  It's the best budget organizer.  It electrically puts every cent you spend into a budget and categorizes it as well.  It just amazing!! So at any given time and I access the app on my phone and find out how much money I have in my shopping budget left for that day.  So it's really easy to decide if I need or just want something based on that.  Jake and I will go over our budget once a week, or since I've starting couponing it's twice or more a week.  So that is my first tip.

Second tip is, COUPON COUPON COUPON AND WATCH ADS!!  I can't believe I wasn't doing this before. I thought it would be really to hard.  But with all the money we were spending on groceries, it was driving me crazy. So let me break some of this down for you.

I ordered 4 newspapers 2 Deseret News and 2 Salt Lake Tribune for $80 for the year for 4 papers.  I'll post the link: melea@freebies2deals.com with the Subject Title of Newspaper Subscriptions. 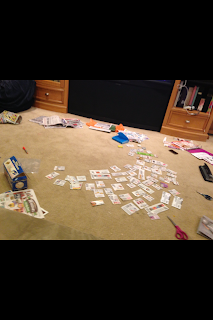 This was my first week trying to organize it all. Kendra and Maliyah helped.
As you can see it was a little overwhelming to say the least. :) I was getting a little discouraged at this point.  And my head was spinning.  I just was hoping I didn't bite off more than I could chew. I took a break and came back and was able to get everything organized in a 3 ring binder. And went through the ad and circled things my family would use.  And just hoped I was doing it all right. My first shopping trip went awesome!! 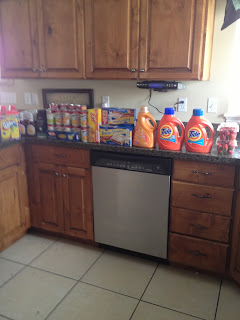 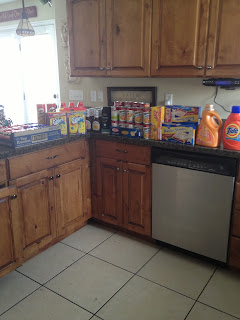 That was my hall for that day.  I saved a total of $19.50. I was amazing! I had just payed for almost one of those newspaper subscriptions with one shopping trip.  Made me more excited for the next one. 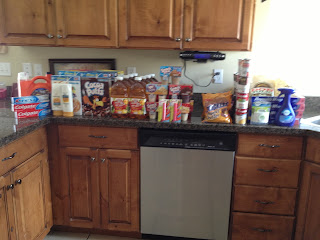 This was my next shopping trip.  Wondered if i was going to do as well as I did the first time.  And BAM!!  I saved $21.50.  There are tons of thing stacked behind others. 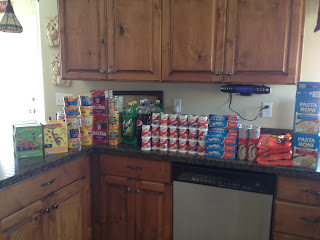 So I thought I had to try and see if I could do better than before.  So I took about an hour and got a shopping list together and headed to the store.  I came out of that store having spent less than $75.00 and save a whopping $42.00.  I was shocked again.  And its making the drive to find better deals stronger. :)

I even feel more in control of everything in my life now.  Its amazing!!  The best part is my kids are so excited about couponing too.  Courtney took it upon herself to organize the coupons that needed to be.  And Kendra is always looking for more coupons.  Maliyah and Kendra love to cut them.  Justin and Austin are just really excited to see more food and eat. :)  Austin put on the Extreme Couponing show and he watched it with me.
One thing that I have found is, the stuff I am buying I would of bought anyway, which did surprise me.  And there aren't many coupons for healthy food.  But my mom gave us a lot of fruit recently.  And there are ads for fruit, vegetables and meat.  It will be interesting as I get better at couponing if I can find more coupons for those types of items.

I hope this has at least helped some of you decide to coupon and try mint.com.  It will truly amaze you.

The First Weeks of School

I have never understood how my children can come home from school every night with piles of homework.  What are the kids doing at school for 6 hours and coming home with 3 hours of homework.  It's just exhausting!  That is my vent for this post. :)  I really needed to get that off my chest.  I feel better now.

This year started off really hard for Courtney.  There have been so many new changes at her school, and a lot more new kids.  She started having panic attacks at school.  She woke-up just a couple of days into school and was crying so hard.  She couldn't being herself to go to school that day.  It broke my heart.  I gave Courtney an essential oil called Balance to take with her to school.  She said that it helped her threw out the day.  Her nerves were getting the better of her.  Things are going so much better for her now.

As I wrote in one of the last posts we separated Justin and Austin in different classes.  I can honestly say that was the WORSE thing for Justin.  Justin and Austin have a special bond with each other.  They help one another, encourage each other and have competitions that make their learning more fun.  I wish the school had never pushed this issue.  It's a lot different if the boys had started school in different classes, but separating them in 3rd grade wasn't the best thing to do.  Justin cries before school and after he gets home.  He misses his brother.  So I email the school and let them know what is going on.  I really hope that with some help from the teacher and administration this will change, or he can change classes.  They also help each other remember homework and lunch boxes.  They truly are best friends.

Kendra and Maliyah are having a great time with their cousin Braxton being in their class.  They love their teachers.  I'm glad they are still in the same class together.  The girls love having play-dates with their cousin and sleepovers.  They are having so much fun together.  Kendra and Maliyah have already been sick this year.  We ran out of multivitamins.  I'm surprised what a huge different those make.  They aren't expensive or anything, we just get them from Costco.  I found that the gummy vitamins are easier on the stomach for the kids and myself.

I just really pray that this school year gets easier for the kids and me.  And I also hope that I can teach them more independence and responsibility.

Love,
The Herrin's
Posted by Jake Herrin at 10:42 AM No comments: