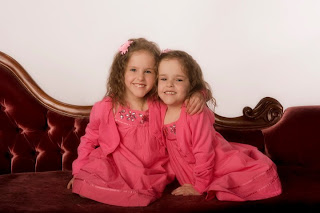 I can't believe Kendra and Maliyah are 11 years old!!  It blows my mind!  What they have been through, what we have all been though these 11 years has been beyond difficult.  But not once did we throw in the towel and say that "we cant do this anymore".  The trials that we have to endure were so trying at times.  We are grateful to have so many people around us that support and love us.  It really is a miracle!!

I think I've said this before, but that okay, I'll say it again.  Kendra and Maliyah's odds were so against them from the time they were conceived.  The doctors told me several times that they wouldn't make it through the pregnancy and if they did they would die shortly after.  I wasn't going to be the one to play God, I was going to do whatever it took to give them the best chance and to help them through whatever it was they would face.  I could of never imagined what would of come out of all of it...

Kendra and Maliyah are so HAPPY!!  They have so many people that love them so much.  Their smiles light up a room.  They have taught me so much about being who I need to.  And taking one day at a time.  It took them years to recover from their separation surgery, and it takes them sometimes weeks to recover from other surgeries and sicknesses. They take everything in stride and they move forward.  Now onto the lighter things. :)

At our house we try and do Birthday weekends, especially since we have two sets of twins.  We want them all to feel special and they each have their own idea on how that can happen.  Kendra wanted to go to her favorite Mexican restaurant, Lorena's and Maliyah really wanted to go and get custard at Nelsen's.  And that turned into shopping and going to the pet store etc.  Just having fun and making memories. :)  My favorite thing to do.

As I have written in the past there is never a dull moment at our house and going to eat at a restaurant isn't dull either.  The kids were all having a good time talking and laughing, but by the end of the meal I could tell Maliyah wasn't feeling very well.  I left the table to take Justin to the the bathroom and when I came back all heck and broke loose.  Maliyah had throw-up in the middle of the restaurant, all over her plate in the to-go box.  It was horrible.  I felt so bad for her and everyone else that was eating around us.  We apologized gave a big tip and left quickly.  I was so worried the next stop on her birthday would be the emergency room for dehydration, but she got better when her friend showed up to watch movies and have a sleepover.

Things are just the way they should be right now.  Everyone is healthy and happy (after a week of ear infections).  We do have ups and downs everyday.  But things are going so well.

Thanks for the countless emails and Facebook posts and messages we have received wishing the girls a Happy Birthday.  You helped make their day very special.